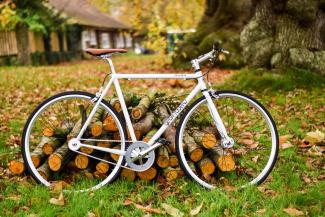 Continuing on with what I do when I’m not working, I want to share a bit about a passion of mine—cycling.

Now, cycling is not something I use to generate business. If we meet at an event and you ask me what I do for a living, I will hand you my business card. Making those connections is just part of being successful in this industry, but that’s not why I ride. I want something to do when I’m away from my business, a way to wind down, and something to turn to on those rough days when the markets are down 500 points and I just need to get on my bicycle to relieve some stress.

Cycling isn’t even a hobby for me. It’s more than that. I’ve been riding since I was maybe 13, 14 years old. The very first bike I had was made from spare parts and I rode it around for some time. Then my dad bought me a bicycle. Out of five sons—I’m the oldest—I’m the only one who got a bicycle, and I went everywhere on that thing. The two things that I was really brought up doing as a child were basketball and cycling, and I guess my passion for each of them is about equal.

Cycling has become part of my lifelong effort to have balance. To live a balanced life, you need three, or perhaps four things: reverence for God, a healthy diet, enough sleep, and an effective exercise regimen. And cycling is a very effective form of cardiovascular exercise—and it still gives me that same joy I remember from when I was a little boy. It’s a joy I can now share with my wife. Spending time with her, being outside and doing something athletic together, it just makes our relationship that much stronger. We’ve made a lot of good friends through cycling, too.

But I can’t say the Charleston area is a bike-friendly community the same way New York City is. The infrastructure isn’t there and the overall outlook towards cycling is different. A lot of cyclists have been injured, or even killed, by motorists. So what we do is we ride in groups. Sometimes these are organized events, like the Spring Century every April, other times it’s just our cycling club going out for a ride. We go early in the morning, when there’s not so much traffic, and also we get out on the quieter country roads. It’s interesting to tune into nature that way, getting to see all the birds and snakes and things, and just really getting a chance to experience God’s Earth waking up for the day.

Some people are surprised to see me out on my bike. In the low country, you just don't see people of color on their bicycles unless it's a matter of necessity, right? The few African Americans we see on their bicycles, it’s usually because they can’t afford a car. They can’t afford, or at any rate, don’t have bright or reflective clothing or a cycling helmet, either, so they’re riding in a very dangerous way. As far as the recreational side of it, there just is no large presence of people who look like me.

And that’s really unfortunate. Aside from feeling lonely on the road, sometimes, I think about how health problems like diabetes, hypertension, and stroke affect African Americans disproportionately. There are a lot of issues involved, but we really have to take care of our health, and cycling could help so much with that. I will say this, that money is often a barrier for us in a lot of sports. You buy and maintain a good bike, you buy a proper helmet, the right clothes, the right shoes, it adds up to a major investment, and a lot of folks of color just can’t meet that expense. Compare that with basketball, where you really only need to buy the ball and a pair of sneakers. The court belongs to the community. So there’s this perception that we’re only into certain sports, and the expense is certainly part of it. But then that perception that develops makes it harder for us to get involved in these activities, even for people like me and my wife who have no financial barrier. I tell friends how long we’ve been riding, and they just think it’s an extraordinary thing.

With our cycling club here, I’ve helped initiate a sort of program to encourage more people of color to ride their bikes, largely because of the health benefits. Sometimes its as simple as just finding out who’s interested in cycling, who’s already doing it, and agreeing to put some miles under our wheels together. I was thinking about starting an African American cycling club, but so much of cycling for me is about the spirit of openness, of getting together with all kinds of people. I don't think that we necessarily need, you know, our own club, we just need to get up and hang with each other.

So, that’s it, that’s why I cycle. It’s about relaxation, it’s about physical fitness and health, it’s about connecting with my wife and my cycling friends, and it’s about getting outside and seeing things living and growing. It’s about living a whole and balanced life. And anything I need to do to live that balanced life, to do the best that I can with all the many blessings God has given me, well, I’m going to do that.